Of the original 3 Avengers, cinematically speaking, Thor is the only one who is getting a 4th solo film. Obviously, Robert Downey, Jr. and Chris Evans (Iron Man & Captain America, respectively) have moved on from the film franchise just as their characters’ arcs have wrapped up following the events of ‘Avengers: Endgame‘. Chris Hemsworth has made no secret about his desire to continue playing the titular God of Thunder for as long as he’s able to do so. Just last month, he told BBC Radio 1’s film critic Ali Plumb that his goal is to now break Hugh Jackman’s record-making 16 year run playing Wolverine in films. (He’s currently at the 11 year mark so what’s 5 more years, right?) With all of that said, there has been a lot of anticipation surrounding the upcoming release of ‘Thor: Love & Thunder’. Taika Waititi returns to direct after his massive success directing 2017’s  ‘Thor: Ragnarok‘ and also is a co-writer on this latest installment of the series, along with Jennifer Kaytin Robinson.

Before we get to the critique, let’s summarize the plot: After being disillusioned by literally meeting one of his gods resulting in the death of his daughter, Gorr (played by Christian Bale) uses a weapon called the necrosword to begin killing gods all across known reality. With each god he kills, his power grows. Soon, he makes his way to New Asgard on Earth where he encounters Thor, Valkrie (played by Tessa Thompson) and… Thor? It appears that Dr. Jane Foster (portrayed by Natalie Portman) now has the power of Thor using the previously shattered Mjolnir (aka: Thor’s hammer). Gorr withdraws, but absconds with New Asgard’s children. He plans to use them as bait to lure Thor Odinson to him and gain access to his new hammer, Stormbreaker, which will allow him to open the gateway to Eternity thus granting him the power to kill all the gods at once. 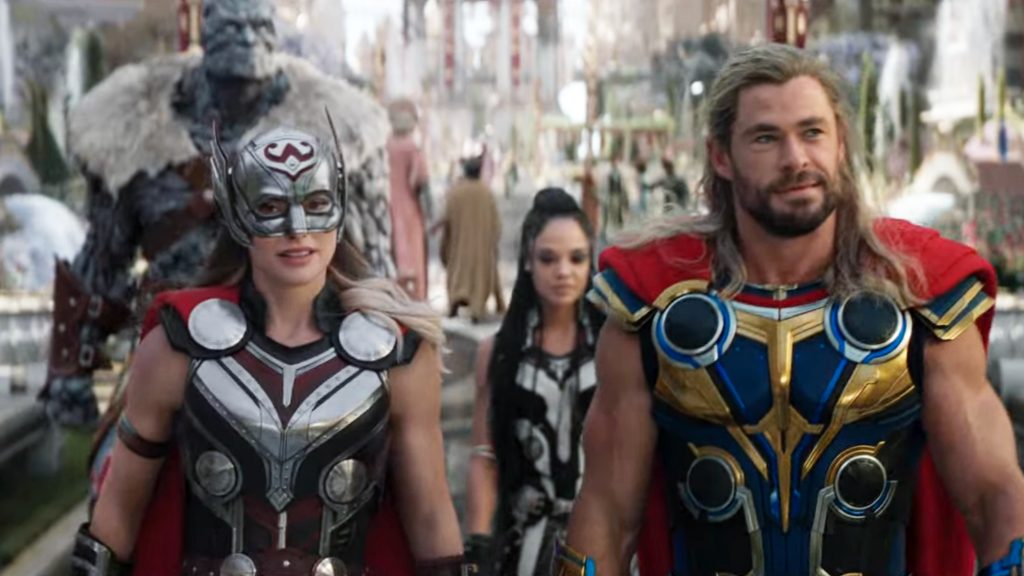 Initially, I was concerned about the inclusion of the “Jane Foster as Thor” story arc given that it was one of my very favorite recent comic book runs, but also rather heavy. In the comics, Jane Foster is dying of cancer. Odin, finding his son Thor to be unworthy, grants the power of Thor to Jane Foster. The catch is, when she becomes Thor, the magic senses the chemotherapy drugs inside her as poison and purges it from her body. This means that each time she becomes Thor, she is essentially dying a little bit more. Like I said – heavy! Since Taika Waititi’s last Thor film was light and mostly comedic (a huge departure from the first two Thor films), this gave me pause. However, I’m happy to say that Jane Foster’s story was handled with the appropriate amount of gravitas that was needed and Natalie Portman’s performance was equally nuanced and well-executed. That being said, the rest of the film was wildly inconsistent. The opening portion where we first meet Gorr (played by Christian Bale in another outstanding performance) is quite ponderous and dark. But then we immediately change gears to an almost cartoonish level depiction of what Thor and the Guardians of The Galaxy have been up to since their departure from Earth at the conclusion of ‘Avengers: Endgame‘. The humor and fun that made ‘Thor: Ragnarok‘ such a hit under Waititi’s direction seems to have been ratcheted up to a 12 and, in many instances during this new film, it was way, WAY over the top. To really enjoy this film, one almost needs to ignore this vast disparity, turn off your brain and just roll with it.

Every one of these actors have proven themselves to be excellent at their craft time and time again. Besides the aforementioned brilliant performances by both Christian Bale and Natalie Portman, we have Tessa Thompson who never fails to impress and Chris Hemsworth himself who always knows how to be dramatic but, especially of late, appears to enjoy leaning in to the newfound fun of his character. The problem in several points seemed to be the writing. At times it was incredibly stilted and actually made the actors seem “bad” as they tried their best to get through what was written for them. Jennifer Kaytin Robinson doesn’t have a huge amount of film writing under her belt and Taika has not yet written a comic book movie, so maybe that is the issue here as to why it felt not only out-of-step with the previous Marvel films, but also more overly comedic than it needed to be at times. (It makes the GoTG movies seem like out-right dramas.) The special effects and the cinematography were all on-point and the overall story itself was fine. My best summation is that ‘Thor: Love & Thunder’ is the “anti-Eternals movie” –  great story, not too many new character introductions, well-paced, but needlessly silly with clunky, stilted dialogue peppered throughout the script. The wild vacillation between dark & brooding to slapstick & silly made for some mental whiplash at times. While the magic of ‘Thor: Ragnarok’ was not recaptured, there are still many great moments here and there in the film that make it worth seeing (screaming goats, Russell Crowe as Zeus, Jane Foster’s Mighty Thor on the big screen, etc). On a scale of 1 – 10, I find ‘Thor: Love & Thunder’ only worthy of a 6.5. Our screening was in IMAX and, given the visuals in the movie, I highly recommend seeing it in this format if you are able to do so! ‘Thor: Love & Thunder’ opens in theaters across the US on 7/8/2022.